Converting a Mercurial Repository to Git

It was a lot easier than I thought it would be! Hopefully this should help others as it appears there are a number of ways to do this.

First of all, clone the repository you wish to convert.

Now create a directory with the name of your project in a separate location.

Next, we need to clone the Mercurial-Git converter into the directory we just created (‘converted-project’).

Once that’s done, we should remove the existing Git references in our directory before re-initialising it.

We’re ready to do the actual conversion now. We simply point the bash script hg-fast-import.sh to our Mercurial repository that requires converting with the -r flag. You should see some lengthy output from the conversion.

That’s the conversion done! Now we just need to clean up a bit.

Don’t be concerned if you cannot see any files in your newly-converted repository when you try to view them.

This is completely normal. You can verify your repository exists by inspecting your Git objects:

You can even do a local filesystem clone of your repository to see what it should look like.

Now, go to your converted repository and add a new remote that points to the empty GitHub repo.

We just need to push the converted repository to GitHub now. From the conversion there should only be a master branch (you can check this by running git branch -a).

As a long-term(ish) user of Java but a recent adopter of Ruby and Cucumber, I’ve been aware of Cucumber-JVM – a rewrite of Cucumber in Java for the uninitiated – for some time now.

But first, some background. I reacquainted myself – and got more serious with – Java a couple of years ago (after allowing myself to get far too rusty with it after my degree finished). Getting certified re-taught me a lot of the fundamentals as well as properly uncovering the deep, dark depths of the language for the first time. At the time I was using Java with the most popular BDD framework at the time - JBehave.

With hindsight, JBehave was unwieldy, unfriendly and simply tried to do too much. I didn’t realise this at the time as verbosity and unwieldiness are often part-and-parcel of Java (and other similar languages e.g. C#). This isn’t a criticism of the language itself – it’s just how it is.

Eventually, I moved on to another company where I was exclusively using Ruby and Cucumber for the first time. Initially it was a struggle but now I fully appreciate just how powerful and flexible the language is and how strongly I identify with Ruby’s mantra and raison d’être.

Which brings us to the whole point of this post.

What I love about Ruby and Cucumber is that the simplicity of each perfectly compliments the other.

There is no mandatory boilerplate.

There aren’t numerous ways to configure the execution.

My personal transition from Java to Ruby has given me food for thought. In the same way that I learnt from my own journey, perhaps Java also can learn from the leanness of Cucumber?

I decided to put the idea into practise.

Today I looked at implementing a basic example from the ITV back-end test suite in Java and Cucumber-JVM. Take a look on my GitHub account for the complete example.

It’s difficult to directly compare the two implementations as they do differ very slightly in their aim and use of helper methods but you cannot deny how similar the two snippets look:

Looking Ahead - The Killer Questions

I’m not trying to draw any concrete conclusions but I think the next year or two could be an interesting time for BDD development with regard to Java and Ruby (and possibly other languages).

In my Jenkins distributed build system I have a Windows slave that’s started via the recommended Java Web Start (JNLP).

Every time I restarted the Jenkins master or the Windows slave (i.e. broke the master/slave connection) I would get a couple of Microsoft JScript compilation errors:

This is a problem because the Jenkins slave will not connect until the errors are dismissed. Obviously this is a major problem in a headless environment.

A similar bug was raised here: http://issues.hudson-ci.org/browse/HUDSON-7819 but no resolution was given.

After annoying me for a while I finally managed to suppress the errors.

To make the errors go away, go to Control Panel > Internet Options > Advanced tab > then click the two ‘disable script debugging’ checkboxes and untick ‘display a notification about every script error’: 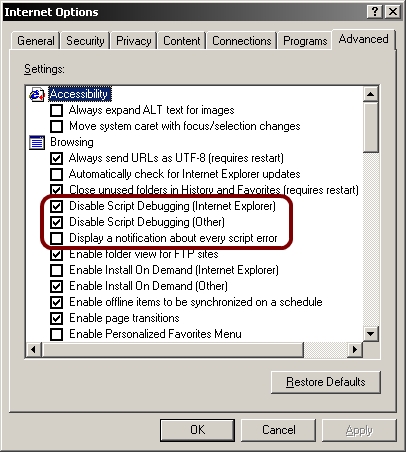 This can be slightly tricky to set up using Windows (requires Cygwin and an SSH server), but there are plenty of guides out there.

Another quick post from something that I worked on today.

I needed to create a Bundler-esque solution for a non-Ruby project. Often, such pragmatic decisions do not offer the cleanest approach but I required a fairly robust long-term solution.

To give some context, I am currently migrating many year’s worth of builds from TeamCity to Jenkins. I’m not going to go into details of why I recommend Jenkins but it’s been one of my favourite tools for a long time (and Hudson before that).

A set of jobs that I’m migrating are non-Ruby but utilise a bespoke Ruby gem via a Rakefile. The problem is that a large number of jobs have a dependency on this gem but as they are not Ruby projects there are no gemspecs, hence no Bundler support.

I think there are two main approaches here:

The first approach is difficult due to the large number of projects across various source control systems (Git, Mercurial). Furthermore, the front-end developers who the projects belong to would prefer not to be burdened with extra local build steps (i.e. complexity with a tool outside of their core skills).

Therefore the second approach was necessary. I had a few requirements:

So I began with a simple Ruby class that lives at the root directory of the bespoke gem. First, I needed to know the current version directly from the gem source.

Where Bloomfedtasks is the name of my Ruby gem (and therefore the Ruby gem module).

I then needed an easy way to figure out what version of the gem was currently installed on the system (if at all). I wasn’t previously aware of the wealth of possible RubyGems commands there were but I easily found what I was looking for. I tested the command in a terminal window first:

Great - all I needed now was a regular expression to capture the version and return it if found, otherwise return 0.0.0 (in other words, not installed).

A straightforward method that decides whether to update is up next:

And that’s it. The complete class looks like this:

Going further with a shell script

The code above is useful in so far that it tells you if your installed version of the gem is the latest. It still requires you to acknowledge that your gem is out of date before needing you to manually build and install it. A simple bash script can do this for you:

It simply executes the Ruby script we wrote earlier and builds and installs the gem if it is out of date.

It was interesting to see how easy this was to put together. It has also sped up a large number of Jenkins builds by ~80% which is nice to see. Of course the biggest pitfall is forgetting to update the gem after making a change…but I’m willing to take that risk as it is not widely used or business critical.

Here’s how you can highlight elements in the browser using Selenium WebDriver with Java. 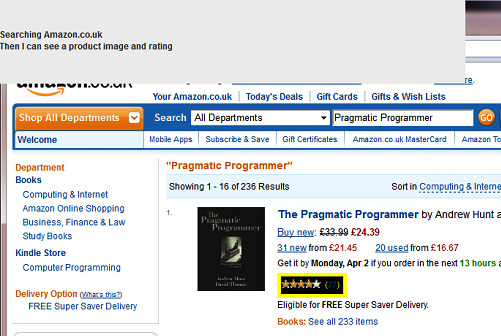 If you want to skip ahead, I’ve got a working example in a GitHub repo that uses JBehave as the test runner. This way, you can build the project yourself, see a “real-life” example and tinker with it.

First of all – if you are building an automation framework at your organisation – it’s sometimes a good idea to wrap certain WebDriver calls through a bespoke, lightweight common library.

We need two methods to achieve our aim.

So we can call executeScript() directly in our method without worrying about casting it first.

If you don’t use JBehave then this should do the trick:

Now we just need to create a highlight method that uses setAttribute().

It’s not the prettiest code but the effect is pretty cool.

You could parametrise the colours if you wanted to. I also feel that the wait time is enough to clearly notice what’s going on without slowing tests down too much.

Using it in your code.

I have a working example in a GitHub repository. You just need Maven and Firefox installed.

Simply follow the running instructions to see the highlight method in action while searching for things on Amazon.